Recently Facebook reminded me where I was two years ago, which in turn led to a wonderful couple of playdays with paint. We were in the beautiful town of Roussillon in Southern France, surrounded by amazing cliffs of ochre, which took our breath away.


While we were there I bought several small tubs of ochre pigment, carefully wrapped and transported it back home, put it somewhere safe and promptly forgot all about it!


The pigment was in powder form and there were only a few minimal instructions (in French)! However, Google revealed several options for using it to colour fabric, which was what I was aiming for.

Although I was tempted by the idea of grinding my own soya beans and blending them into soya milk (which had to be fresh - couldn't just pop to the supermarket), I decided to go for an easier option. Firstly, I mixed it into an acrylic paint with soft gel medium and then mixed that with fabric medium to make a fabric paint.  It has been suggested that I could probably have just used the fabric medium so will try that next time.

I used it in several different ways, printing and painting on wet and dry fabric but unfortunately, the pale washed effect doesn't show up very well in the photographs I took. However, I managed to photograph the monoprints more successfully: 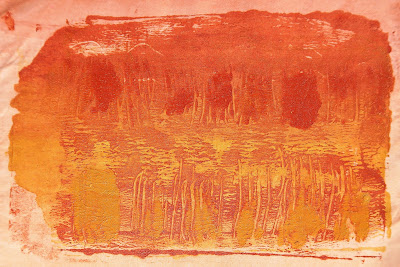 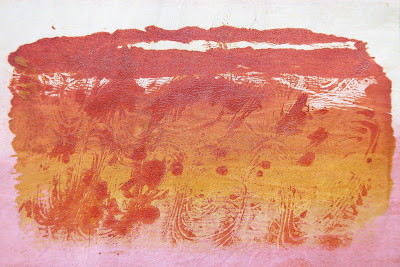 I tried printing with some woodblocks, with limited success. However, I found it was possible to wash over them again after printing to deepen the background colour, which improved them a little. The star print (top left below) was not very clear but I stitched over the imperfections and re-washed the background and used it for a birthday card (top right).


Finally I wanted to try painting some scrap felt, which I had embellished with various fabric strips and yarn, stitched into with thick wool and embellished some more. I discovered three things: it worked better if the felt was wet, the paint sunk through so I needed to turn it upside down after painting, and it took a very long time to dry!

I really enjoyed my ochre playdays and will definitely return to it in the future. I would like to see what happens if I try machine stitching on some of my samples and I might even get some soya beans!