It's that strange time in between Christmas and New Year, when I never really know what time it is, it takes a lot of concentration to even work out the day of the week and the fridge is full of food that needs eating up - tiramisu for breakfast, anyone? My thoughts wander towards tying up the old year's loose ends before moving on to the new. I've been meaning to blog about a couple of workshops I attended in the latter part of 2018 and was waiting until I had something approaching a finished piece to show but I know it will be a while now because exhibition work will have to come top of my list. So, workshop works in progress it is! Here's the first of two - the second will follow shortly (but probably not till next year!)

Recently, Bernice and I spent a great day with a couple of friends, exploring Clare Bullock's world of nuno-felting in her wonderful workshop in Sharnbrook. It was a bit like entering Aladdin's cave or the Tardis - seemingly quite small on the outside but full of textile treasures, stacked floor to ceiling inside. Thanks to Bernice (BH) for many of the following photos ...


The table was set up before we arrived with everything we needed - we only had to bring our lunch  (now that's my kind of workshop!)


After a quick introduction over coffee, Clare gave us a demo of her basic technique ...

As she worked, Clare described her methods very clearly and also explained how she makes a collection of  small pieces, which she adds stitch to, individually, until eventually making a much larger piece by stitching them all together. These collages have great personal meaning for her, many being linked to significant people, times or places and the stitch tensions and patterns reflect her feelings at each particular time. With that in mind we all went on to to make several small pieces.


This shows one of my examples, at the stage where the wool fibres are beginning to show through the sari silk chiffon ...


Here are Bernice's beautiful pieces, which she managed to felt much more evenly.

The eagle-eyed of you will no doubt have spotted the odd one out of the four above. The final part of the workshop was to make another nuno felt, using white wool tops and white/undyed silk chiffon, scrim and butter muslin. After felting, we took them outside, pegged them on a line while still wet and dripped acrylic inks onto them, spraying with more water if desired. Great fun was had and we successfully coloured quite a bit of the pavement outside Clare's workshop, while just about avoiding our shoes.

Here's a close up of my painted sample - I particularly liked the texture created with the butter muslin at the bottom.

In fact, I was very taken with the idea of painting the nuno felt while still wet and will definitely be trying more of that.

However, it will be a while before I build up enough pieces to make something as big as this beautiful work which hung on Clare's wall.

On closer examination, the use of stitch can be seen.

More stitching in the many wonderful examples of Clare's work dotted around the studio ...


I've looked at these examples of my own several times and have been trying to decide on how and where to add stitch ... 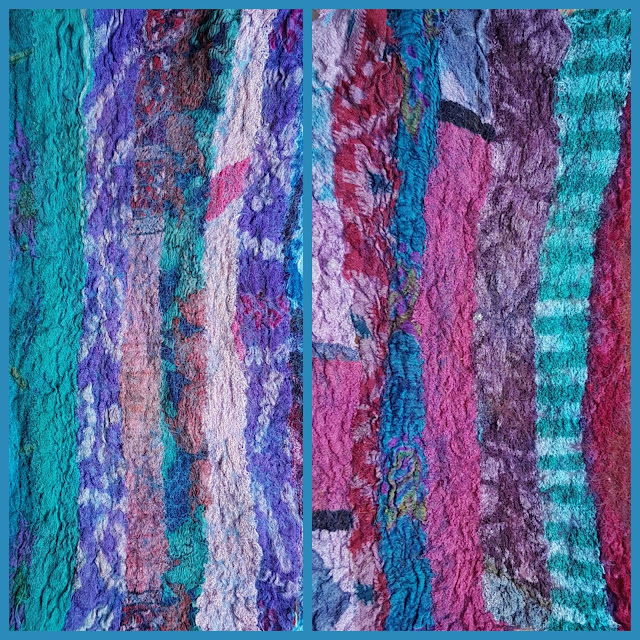 ... but remembering Clare's comments about the stitching reflecting her mood and feelings at the time and bearing in mind my earlier comments about not even being able to decide what day it is at the moment, maybe those creative decisions are better left for a while.

One thing I can be sure of is how much we enjoyed the workshop and I hope to be able to work with Clare again next year - maybe something like these inspiring 3D examples ... 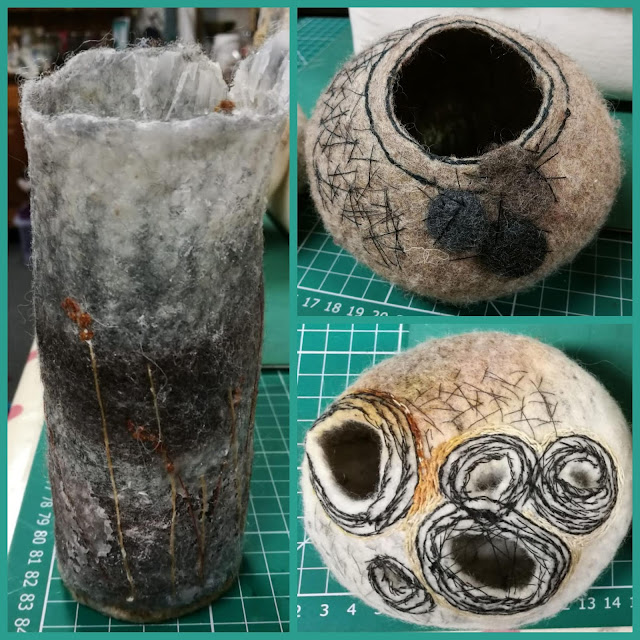 ... or this exquisite little vessel. 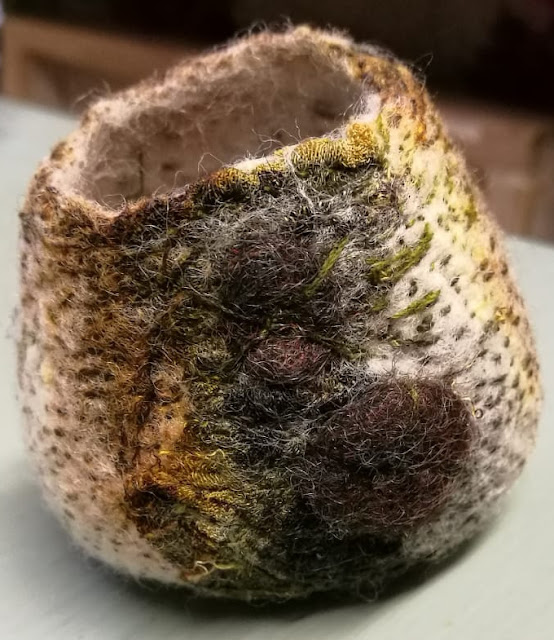 So much to look forward to in 2019. Hoping for happy times for you all as we move into the New Year.