I have been a member of a local Embroiderers’ Guild for several years now and have very much appreciated the friendship, skill-sharing and inspiration I’ve found there – not to mention the many bargains to be found on the sales tables! Members have always been very supportive of my work and have publicised Traverse’s exhibitions at the NEC and Uttoxeter on their social media pages, for which I’ve been very grateful.

My concentration on work for those exhibitions  has sometimes made it difficult to find the time to take part fully in the Guild’s activities but recently I was rather taken with the idea of their summer challenge, which involved a very large piece of white card. We were challenged to use some or all of it in any way we wished, as long as there was some stitch on it.

I felt challenged but also not particularly full of creative inspiration, so I took a very easy option and decided to use it for a weaving. I cut the card in two – making the largest squares I could. 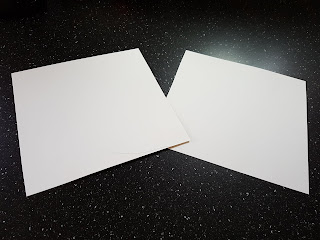 I knew I had to have colour, so searched out some of my hand made printing blocks from my Journey work. Remembering the recent Patrick Heron exhibition at St Ives (see my blog 'Looking' below) and elements of his work I'd noticed, I tried placing some of the symbols, near the edges or in the corners, which I wouldn't normally do (and I wasn't sure whether it worked). Then, I coloured the background with some spent dye. 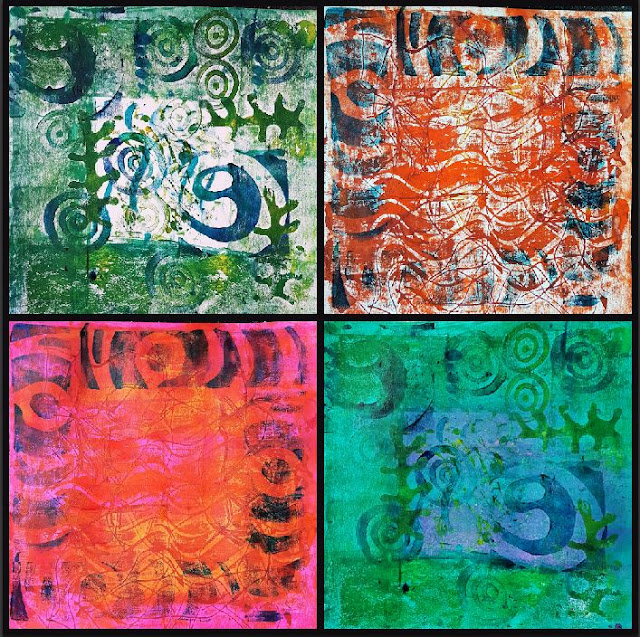 I cut the card into wavy strips and wondered about how to cover the stitch element of the challenge. (I didn't notice that one of the edge strips was missing in the photo below - I did find it again!) 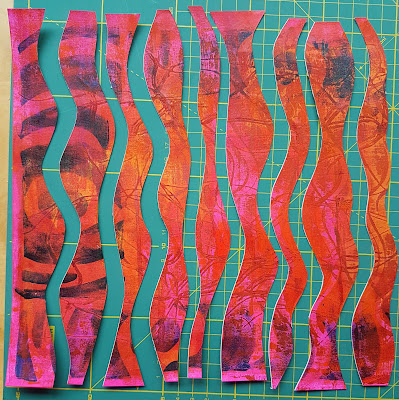 Apart from the fact it was a requirement, I needed to think carefully what else I wanted from the stitch - texture, contrast, decoration?  I decided to use some matching variegated threads to machine a simple line of stitching down each side of the strips; it would provide some texture and a little decoration but no contrast, as there was plenty already with the complementary colours in the warp and weft and I wanted the painted pattern to remain visible - and let’s face it, hand stitching into that thick card would have been hard work. I didn’t want that much of a challenge! 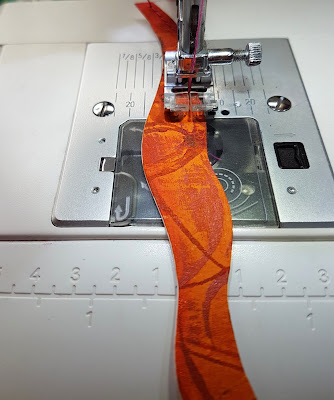 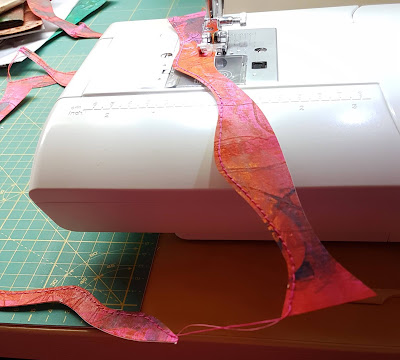 All that complication did mean it was easier to make a square again afterwards though, without too much effort. 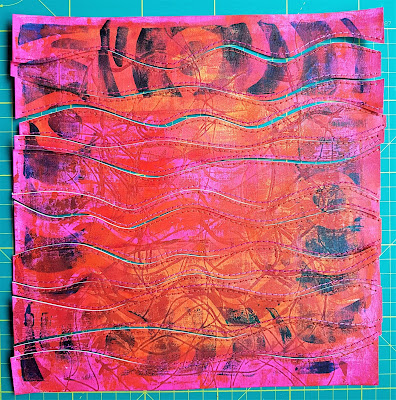 I coloured along the white edges with a matching Sharpie to hide them, but forgot to take an 'after' photo to go with the 'before' one below. 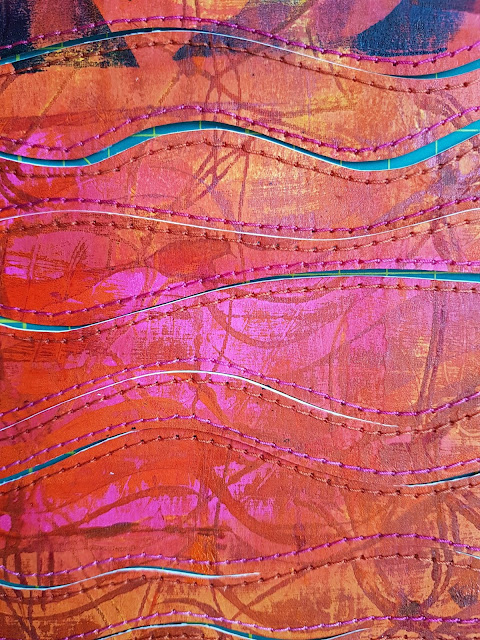 I repeated the whole process with the blue square but didn’t photograph every stage – you get the idea by now! 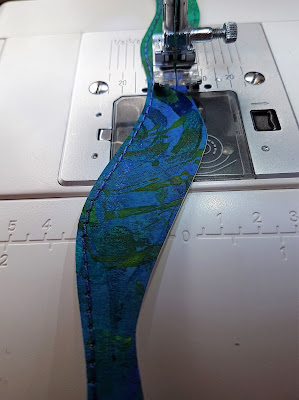 The final challenge of the whole process was weaving the strips together and in some ways that proved the most difficult. I had forgotten to allow for the fact that the thickness of the card, together with all the stitching, would mean that the woven strips wouldn’t fit snugly together, as woven paper or fabric strips would. I had to do a lot of fiddling and a bit of creative placement of the four edge strips to make it work and I think it just about did. 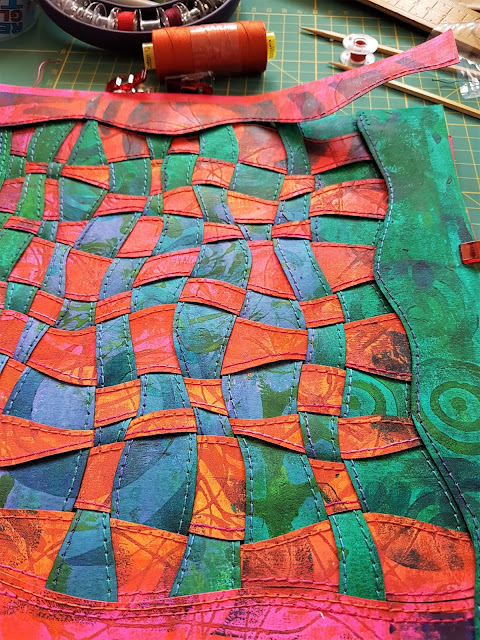 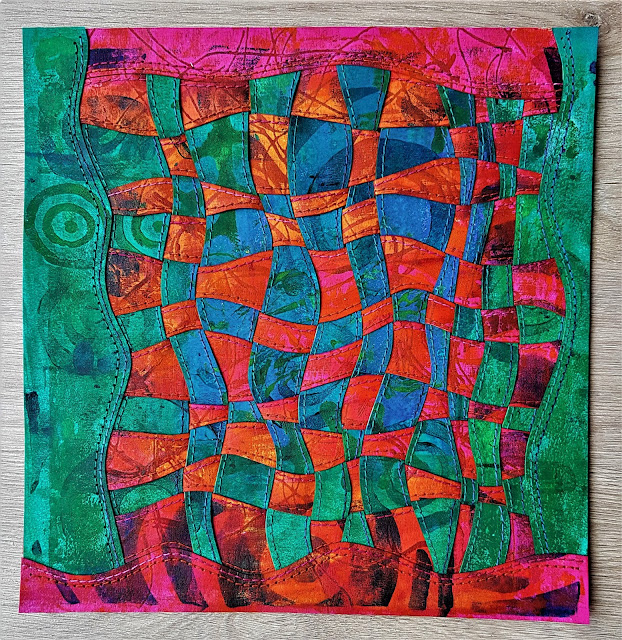 I had planned to cut out a circle and rotate it slightly, as I had done with this earlier investigative piece in my portfolio … 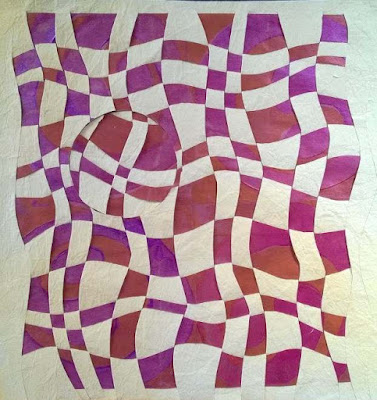 … but despite very helpful suggestions from Becca, I was worried the stitching might unravel (see close-up of stitching below) and I didn’t want to take the risk as other projects were calling me and the deadline was approaching. 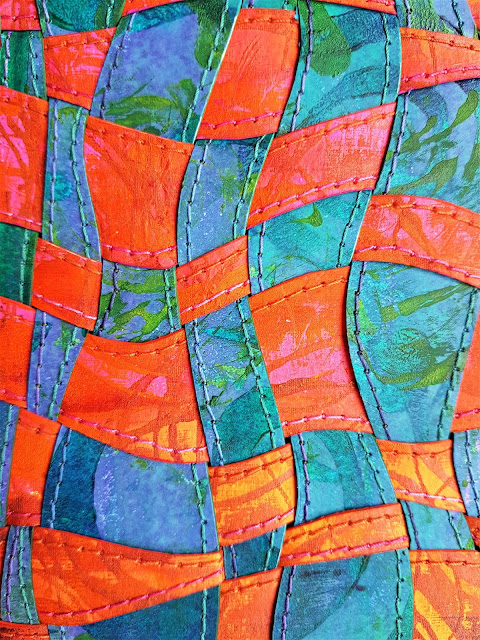 I still find myself wondering if it would have worked. Who knows – I might challenge myself to try that later!